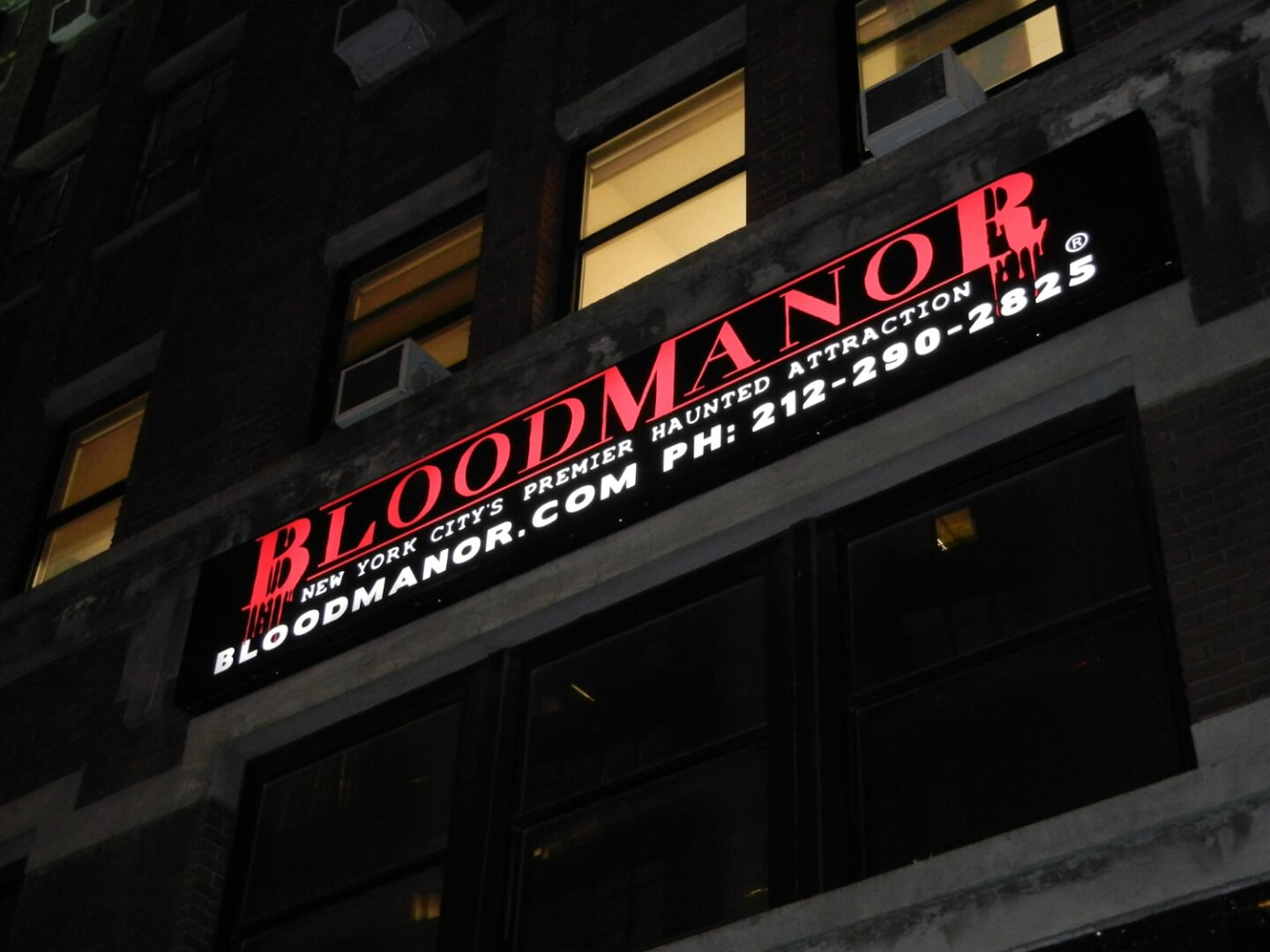 Blood Manor is a haunted house attraction in New York City now in its 10th year of operation, with plenty of scares in store for this Halloween season.

It’s set up in the traditional scare house style of a linear path through a series of rooms, and each room is individually themed to cater to every visitor’s phobia of choice. From clowns to werewolves (or just full moons, if you belong to the latter demographic), you’re guaranteed to come face-to-face with your fears. Right from the beginning, Blood Manor kicked into high gear. Even the safety spiel was fun—a large man covered in fluorescent neon paint and wielding what appeared to be a meat cleaver fashioned into a staff lined us up in a group of 6 with our backs against a wall, firing-squad style. He then proceeded to inform us of the rules of the house (don’t touch the actors and they won’t touch you), all while walking up and down the line, looming uncomfortably close into each of our faces in turn. He would leer at us inches away from our faces as he spoke, then pause for a moment to let the discomfort sink in. (The urge to lean forward slightly and *boop* him on his nose with mine was overwhelming.) From here we were ushered into the first room to begin our experience. We moved through a graveyard scene where some sort of creature skittered across the floor by our feet as we tried to move forward to the door. Once the coast was clear we then entered a tight room made up to look like the foyer of an old decrepit house. The focal point of the room was a mirror over a sooty fireplace, and as our group moved closer our reflections changed from our normal (if slightly pale) human faces to zombified version of ourselves, with our skin dripping off our faces and blood oozing from our eyeballs. We were so busy checking out our gorgeous, sexy selves that we didn’t notice the life-sized porcelain doll appear behind us. After successfully scaring the bejeezus out of us, she herded us in the direction of the door and we moved onwards.

Next was a corridor that was entirely pitch-black and nearly sound-proof. There was no way to orient myself in any particular direction and although I couldn’t see them, I could hear the others in my group bumping into the walls and trying to find each other. It was at this point that my favorite part of haunted houses came into play—the unspoken agreement between strangers to rally together to survive the experience, where everyone wordlessly agrees to help each other out and make their way through. We made a sort of pants-wetting conga line and finally found the doorway.

From here on out, the pace of the haunted house definitely picked up.

The next few rooms are presented rapid-fire style, where visitors are given less and less time to take in their surroundings before being approached by the scare-actors and being moved into the next experience. While it’s difficult to appreciate the effects and settings, it makes for a more terrifying experience when you’re unable to finish processing a thought before another scare interrupts it.

After emerging from the dark corridor, we found ourselves in a blood-soaked kitchen and were quickly accosted by a man in a butcher’s apron armed with a meat cleaver and looking pretty stabby. After dodging around him, we walked through a kind of meat storage room with bodies hanging trussed upside-down from the ceiling and had to physically push past them to make forward progress. Not helping was the psycho maniac running around the bodies, pressing them against us and insisting that we get a closer look at them.

Also present in the attraction was a room dedicated entirely to clowns, where one clown danced around you and tried to entice you into climbing into a jumbo-sized jack-in-the-box, which was presently occupied by a young girl-clown holding out grabby-hands toward you. The best part of this room was the scare-actors themselves. Although this was true of the entire attraction in general, it was surprisingly pleasant to come across an actor whose vocabulary was comprised of more than just the odd groan or scream, and who was actually articulate and had very compelling arguments for why we should get nearer to the girl in the box. Y’know, he was right, that box did look pretty comfortable…

Another highlight of the night was the appearance of an 8-foot-tall animatronic werewolf looking very convincing in the light of the full moon, which looked gorgeous and humongous hanging over our heads. And then came the second werewolf who startled us out of our moon-induced hypnosis and into running for the exit. Not naming names, but some of us may have been using their boyfriend as a human shield. (Sorry honey!)

Later on we found ourselves running through not one, but two separate rooms with surgeons operating on live victims, a nightclub with zombie strippers putting on a show, and a man butchering pigs who are still squealing so loudly it almost drowned out the butcher’s yells as he ran toward us.

Blood Manor’s finale begins as you are handed a pair of 3-D glasses and enter a maze of neon paint and blacklight. The gory murals on the walls, paint-splattered props, and even the make-up on the scare-actors pop out at you as you navigate your way around the switch-backs and blind corners. It all culminates in a large area monopolized by a machine gun turret you are forced to walk in front of, gleefully manned by a crazed soldier. Helping you along your way is another soldier armed with a chainsaw, which is super effective in hand-to-hand combat, I’m sure. Leaving Blood Manor, I was exhausted from screaming and laughing so much. This weekend being their opening weekend, there were a few spots where it was evident an effect wasn’t quite working as planned, but even with those missing the overall attraction was fantastic. And in addition to the experience itself, admission to the house on opening night included photo-ops with Annabelle, the living doll who is the star of the horror movie by the same name which was also released that night. However, a warning to those who plan to visit Blood Manor — the website suggests not wearing white or expensive clothing, as it is likely you will come into contact with the faux blood used throughout the attraction. In many instances it is necessary to push past props or sidle against a blood-spattered wall. However, they assure it is water-soluble and I can verify it did indeed wash out just fine.

In addition to the standard experience running each weekend through Halloween, Blood Manor also offers “Touch-Me Thursdays”, where — you guessed it — the zombies and werewolves will touch you, and “Lights Out Nights” where the majority of the lights are shut off and you are armed with nothing but a glow-stick to see by.

Blood Manor continues through November 8 on select nights. More information can be found at BloodManor.com.